On November 4, 2013, Walter Maddox was sworn in for his third term as Tuscaloosa’s 36th Mayor. Since his first inauguration, Mayor Maddox has led initiatives to increase economic development, improve customer service with the implementation of Tuscaloosa 311 and provide quality pre-k education for academically at-risk four-year old children.

Mayor Maddox has been nationally recognized for his crisis management following April 27, 2011, when an EF4 tornado destroyed 12 percent of the city and severely damaged or destroyed 5,300 homes and businesses. Mayor Maddox is currently serving as a fellow with the Program on Crisis Leadership at Harvard University’s Kennedy School of Government. In 2012, Mayor Maddox was named Municipal Leader of the Year by American City and County (the publication for state and local governments) for his strong, decisive and comforting leadership.

Mayor Maddox is a Tuscaloosa native and graduated from Central High School. He earned his bachelor’s degree in Political Science and master’s degree in Public Administration from UAB. While at UAB, Mayor Maddox was a four-year letter-winner on the football team.

In 1996, Mayor Maddox began his professional career as a field director with the Alabama Education Association. In 2001, he was appointed executive director of personnel for the Tuscaloosa City Schools. In that same year, he was elected as city councilman for the Sixth District.

Mayor Maddox is married to Stephanie Roberts Maddox. He has two children. His favorite hobby is running and he has completed several marathons and half-marathons. 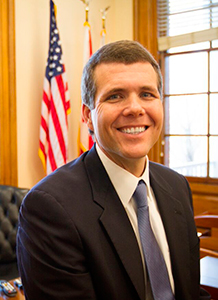