Sandi Fowler serves the city of Cedar Rapids, Iowa, as the assistant city manager. Sandi has held several positions in her more than 25 years in Cedar Rapids city government. She served as the assistant to the Public Safety Commissioner for 10 years under the commission form of government, and another eight years as the liaison to neighborhood associations and community groups on behalf of the Cedar Rapids City Council.

In 2008, just weeks before Cedar Rapids suffered a devastating flood causing $6 billion in damage, Sandi became the assistant to the city manager, and in 2012 was promoted to assistant city manager. Sandi was responsible for the rebuilding of damaged and destroyed city facilities valued at over $300 million, including a $10 million renovation of a former federal courthouse into city hall utilizing historic tax credits, and a new $40 million public works and city services facility.

Sandi leads the departments of Public Works, Community Development, Building Services, and Transit. In addition, Sandi’s responsibilities include improving internal operations of the city and how they serve the public, particularly through program management and citizen services. 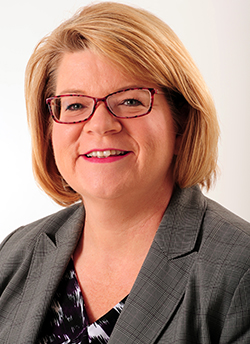