Dr. Leonard Marcus is founding co-director of the National Preparedness Leadership Initiative, a joint program of Harvard School of Public Health (HSPH) and Harvard’s Kennedy School of Government, developed in collaboration with leadership of the Centers for Disease Control and Prevention (CDC), the White House Homeland Security Council, the U.S. Department of Homeland Security, and the U.S. Department of Defense. In recent years, Dr. Marcus’ research, teaching, and consultation have played a key role in national and international terrorism and emergency preparedness and response. He and his colleagues pioneered development of the conceptual and pragmatic basis for “Meta-Leadership”- “overarching leadership that strategically links the work of different agencies and levels of government;”  “Connectivity” – the coordination of “people, organizations, resources, and information to best catch, contain, and control a terrorist or other threat to the public’s health and well-being;” and “Swarm Intelligence” as it applies to crisis leadership.

Recent research activities have taken him to the center of emergency preparedness and response through direct observation and immediate interviews with leadership during and after: the 2013 Boston Marathon bombings; the early H1N1 response; the 2009 and 2006 wars in Israel; the 2010 BP oil spill; and in 2005, Hurricanes Katrina and Rita on the Gulf Coast. His co-authored article, “Meta-Leadership and National Emergency Preparedness: A Model to Build Government Connectivity” has garnered significant international attention as its methods and techniques are used successfully by leaders during crises. He led a seven-year CDC project at Harvard as well as a three-year project with the CDC Foundation and Robert Wood Johnson Foundation to take preparedness training to 36 locations across the country through “Meta-Leadership Summits for Preparedness.” At the invitation of the president’s advisor on homeland security and counter-terrorism, he lectured at the White House on meta-leadership to a cross section of senior federal department officials from across the government.

Prior to being recruited by the federal government following 9/11, Dr. Marcus’ primary work was in health care negotiation and conflict resolution. Dr. Marcus is founding director of the Program for Health Care Negotiation and Conflict Resolution at HSPH. He is lead author of the primary text in the field, Renegotiating Health Care: Resolving Conflict to Build Collaboration: Second Edition (2011).  The book was selected as co-recipient of the Center for Public Resources Institute for Dispute Resolution “Book Prize Award for Excellence in Alternative Dispute Resolution” in its first edition (1995). In 1994, he co-authored Mediating Bioethical Disputes: A Practical Guide. Along with colleagues, he is now at work on a book on Meta-Leadership.

Dr. Marcus has directed numerous projects and authored papers intended to advance development of the leadership, negotiation, collaborative problem solving, and conflict resolution field applied to health related issues. At the School of Public Health, he has been principal investigator on grants from, among others, the William and Flora Hewlett Foundation, the National Institute for Dispute Resolution, and the W.K. Kellogg Foundation, to develop a curriculum, research agenda, and conceptual and applied framework for the field.

Dr. Marcus completed his doctoral studies at The Heller School of Brandeis University. He was selected as a Fellow for the Kellogg National Leadership Program from 1986-1989. In his spare time, Lenny plays saxophone and clarinet, is a cartoonist, and loves to travel. 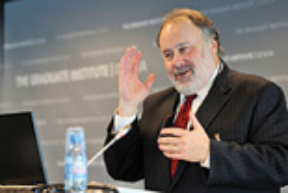