Lane Roberts was named director of the Department of Public Safety by Gov. Jay Nixon on March 19, 2015 and confirmed by the Missouri Senate on April 16, 2015. Roberts, a 42-year veteran of law enforcement, served as Joplin police chief from 2007 to 2014. Roberts was instrumental in the coordinated local, state and federal effort to respond to the EF5 tornado that struck Joplin on May 22, 2011.

During his tenure as chief, the Joplin Police Department became accredited through the Commission on Accreditation for Law Enforcement Agencies (CALEA) and total crime decreased by 27 percent. In 2013, Roberts was selected as Chief of the Year by the Missouri Police Chiefs Association.

Roberts has an associate degree in law enforcement from Wenatchee Valley College in Washington, a Bachelor of Science from Liberty University in Virginia and received a Master in Business Administration from William Woods University in Fulton, Missouri. He and his wife have three daughters and seven grandchildren. 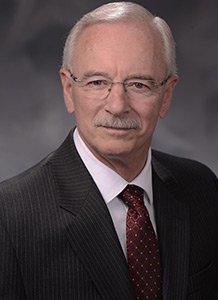