Libby Turner is a member of the Federal Emergency Management Agency’s Federal Coordinating Officer (FCO) Cadre. In this capacity, she serves as the representative of the President, the Secretary of the Department of Homeland Security, and the Administrator of FEMA for Presidential Disaster Declarations. Her responsibilities include the executive coordination of Federal activities and resources in support of state, tribal, territorial, and local governments. In addition, Ms. Turner is a Lead Field Coordinator, supervising and mentoring FCOs and Federal Disaster Recovery Coordinators.

In her twelve years with FEMA, Ms. Turner has served in more than 40 disasters and special assignments. Disasters have included large scale events such as Hurricane Sandy, the multiple Missouri disasters in 2011 including the EF5 tornado that struck the Joplin area, Hurricane Katrina, and the four Florida hurricanes of 2004.

Special assignments have included serving as the Acting Deputy Assistant Administrator of FEMA’s Recovery Directorate in 2010 and the Acting Deputy Director of FEMA’s Louisiana Recovery office in 2009, engaging in national planning efforts, and participating on executive level steering committees.  Ms. Turner participates in emergency management course development and delivery, and is an accomplished speaker, with presentation venues including federal, state, partner organization and international events.

Prior to FEMA, Ms. Turner served for 14 years with the American Red Cross at both the local chapter and national levels. She was a national level Disaster Operation Director who participated in numerous responses including major events such as the Midwest floods of 1993 and multiple hurricanes, including Andrew and Floyd. As a Team Leader for the Crisis Response Teams that deployed in the event of aviation, Weapons of Mass Destruction or other mass casualty events, Ms. Turner was part of the initial leadership team on the ground following the September 11 attack in New York. There she implemented several new initiatives, including Respite Centers for response workers at Ground Zero. She was a national level Disaster Instructor, and led the development of the Disaster Readiness Exercise and Evaluation program used to standardize and measure disaster response readiness in American Red Cross units throughout the nation.

Ms. Turner has an education and management background and holds a Master’s degree in Educational Administration. She is a Certified Emergency Manager and has completed the Executive Leaders Program at the Center for Homeland Security and Defense, Naval Postgraduate School and Executive Courses at the Harvard JFK School of Government. She was awarded the FEMA Administrator’s Award in 2011 for her expertise in leadership and team-building, and was commissioned a Kentucky Colonel by the Governor of Kentucky in 2012. 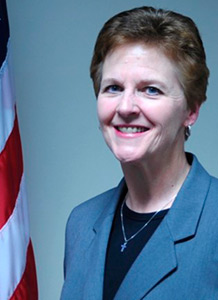