David Mink is the former editor at Joplin Regional Business Journal (JRBJ). A career journalist, he started at JRBJ as a reporter in January 2011, just five months before the May 22 tornado.

As a reporter and sometimes editor for several daily newspapers throughout the region since 2004, Mink had covered tragedy before. Car crashes, home fires and weather-related disasters were standard assignments for modern, jack-of-all-trades reporters, and Mink was no exception. But nothing in his experience could have prepared him for the 2011 Joplin disaster. Seeing so much of his hometown in ruins, it was impossible for him to separate emotion from work, to be the unbiased reporter that could distance himself from the situation and report from a place of disaffectedness. Every story was a a story from a neighbor; every picture was a picture of someone who had shared the same hardship or worse. Sometimes much worse.

Although JRBJ is a niche publication that doesn’t “chase ambulances,” so to speak, in 2011 the business of Joplin became the business of recovering from an EF5 tornado. More than 500 businesses had been destroyed and thousands had been indirectly impacted. Along with his then-editor Chris Roberts, Mink was on the front line of recovery efforts, chronicling the moves of the region as companies rebuilt, reestablished themselves and got down to the business of reinvigorating the commerce of southwest Missouri.

Mink graduated from Missouri Southern State University in 2004 with a bachelor’s degree in English. He is a Joplin native, and lives today near Shoal Creek with his wife and two children. 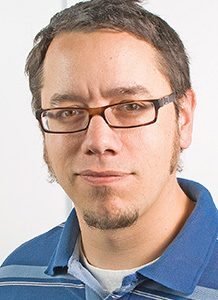